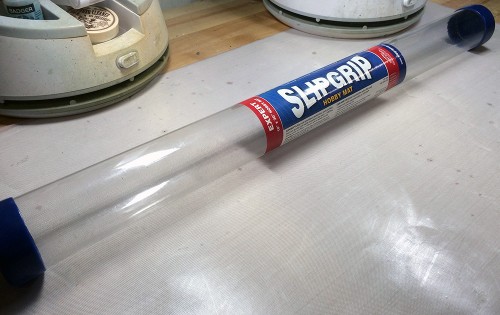 As most people know, painting can be a particularly messy hobby. Add in the overspray of airbrushing and most work surfaces are doomed to become an acrylic caked jumble of colors. Enter the Slip Grip hobby mat, a product that claims to be Teflon-like in nature. Paints, adhesives, and more are stated to effortlessly wipe away, leaving behind only a clean work-space. Does it live up to these claims? I put it through its paces over the last 8 months to find out. 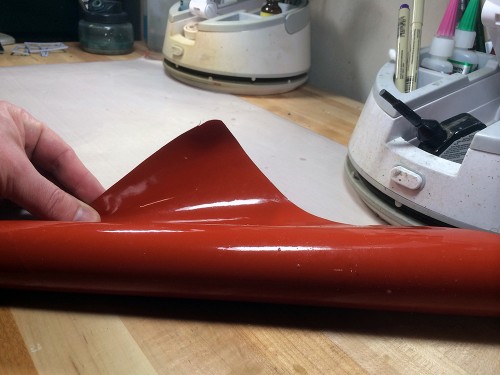 I opted to buy the largest version of the mat that they make, the “Expert” size, which measures a sizable 17.5″ x 30″. The company offers a few smaller sizes, but this size covers a large area of my work bench. Even overspray from the airbrush rarely strays off of the mat. The top side of the mat is an off white color and shows a slight weave appearance when inspected closely. Unsurprisingly, the mat has a smooth texture that isn’t uncomfortable to rest your arms on.

The underside is covered in some sort of red polyurethane material with rubber like properties. Once the mat is placed it won’t slip, but re-positioning only requires that you lift the mat first. 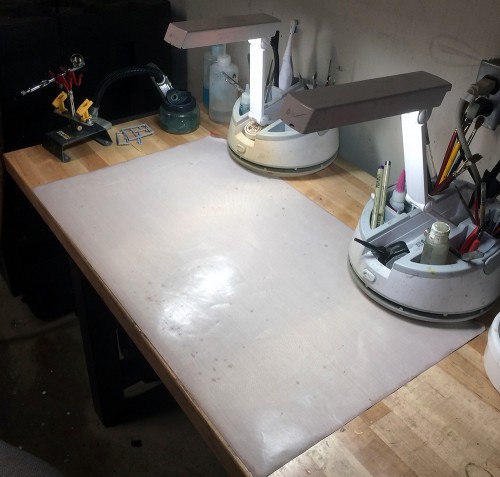 During use, the mat performed as I expected. Paints wiped away with a dry paper towel and minimal effort. CA glue took a bit more effort, but was still easy to remove. Even the more difficult materials like hot-glue and epoxies can off with a scrape from a fingernail. 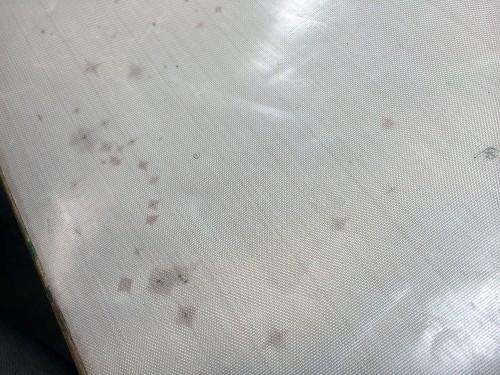 Unfortunately, the mat isn’t perfect and showed a couple of problems after a few months of wear. The first issue that appeared was a collection of discoloration marks. Aside from the cosmetic problem, things also seem to stick more stubbornly to these spots as though the coating is worn through. I suspect that the cause of these marks is linked to my use of alcohol or mineral spirits. If you don’t use either of these solvents and stick only to acrylics, this issue might not appear. In addition, I’ve noticed that after using the heat gun near it, the non stick property becomes weaker. In this case though, the effect is somewhat temporary. 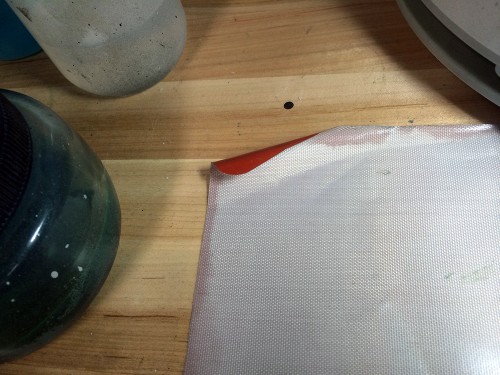 The other issue is seen here. The corners have a strange tendency to lift. Notice the discoloration on the edge near the lifting. It’s possible that this issue is also linked to the solvents, but it’s difficult to be certain.

Even with these shortcomings, I still love this mat. I originally purchase it for cleanliness, but the surface itself has proven to have many uses. For instance, when I use hot glue on the bottoms of bases, I can simply set the base down on the mat. After the glue dries, I gently break it loose and the base now has a nice flat underside. Also, unlike porous surfaces, the mat replicates the model surface rather well. When I want to test the spray pattern of my airbrush I find that if the paint pools on the mat I’ll run into the same problem on the model. In addition, the mat also makes a good palette if I don’t want to use the wet palette .

Coming to a decision for a rating for this mat is difficult. I would buy it again, and I simply love the product. That being said, I would love it even more if the two wear problems were addressed. In addition, the price is also fairly steep at $30 for the large version. At that price point it’s hard to view this as a product that I need to repurchase regularly due to wear. While my mat still works well, I can’t help but wonder how it will perform in a year.