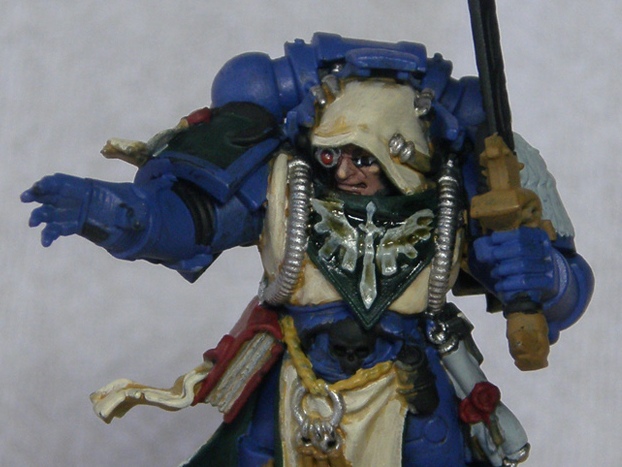 Olde World Games in Elk Grove is hosting a space marine painting competition and as I don’t have a single painted space marine, but intend to start using dark angels as allies, I decided to paint the librarian from the Dark Vengence starter box.  Firstly, because it’s a very nicely posed and detailed model, but also it gives me a chance to get outside of my comfort zone and try a few different techniques while painting.

I started with the face because it’s probably the most difficult part to reach on this model, so I wanted to make sure I got it right before doing any other part of the model.  The face is generally the first thing a person will look at when they are looking at any model, so it’s important to get it right.  After the face I did a base coat on the armor so that the armor could be distinguished from everything else, and also because the armor tends to be tucked in and hard to get to without getting paint on other parts of the model, so a good place to start. 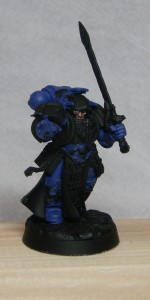 Next I decided to start building up the cloth and tabard, along with the purity seals.  Using a medium brown color, in this case the XV-88 from citadel, I applied the paint using a size 0 brush. 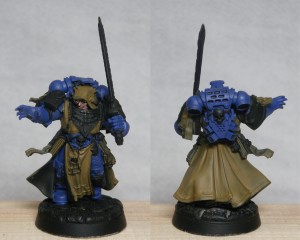 For the next step, I slowly started building up layers of tan and white until I was getting close to a nice white tabard.  Again I was doing a lot of this with either a 0 or 2/0 brush. 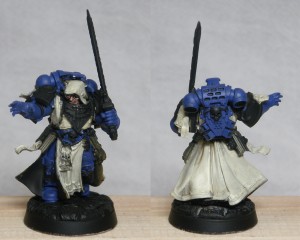 The wash came next, and in order to bring it back down to the original color, instead of using a GW wash, I watered down the XV-88 to as watery a consistancy that I could while still having the paint adhere to the cloth area. 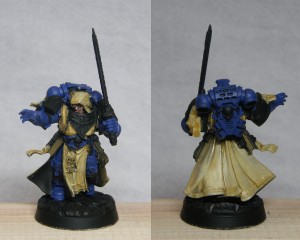 After the wash, I started building up the layers on the cloth again, trying to keep with the dark angels theme of having a more cream colored coth (unmixed screaming skull was where I stopped at this point) as opposed to a stark white.  I also then painted the inside of the cloak, shoulder pads, back of the tabard, and the chest piece with a dark green base, citadel’s Caliban Green.  For this I was using a 2/0 brush to be able to be a bit more measured in my application of paint. 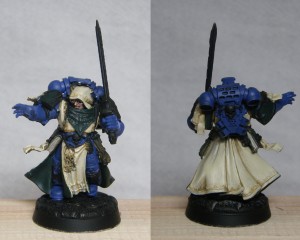 Now the I’ve got base colors on a majority of the model, but was at a point where I could easily clean up other marks I switched to doing as many details around the cloth as I could, so the book on the hip, grenade, power cords, and the fine details around the edge of the cloak, hood, and at the bottom of the tabard.  That way if I screwed up painting those and got some paint on the cloth, I could easily just clean up the mistakes with screaming skull with out having to worry about blending so much.  I also used this opportunity to clean up the armor around the cloth where I’d accidentaly gotten paint while working on the cloth.  For getting close between two opposing colors like the blue and white I would use a 5/0 detail brush. 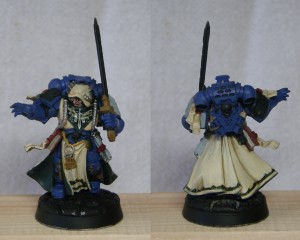 That’s all for this turorial, next tutorial I will go through some of the details and hopefully have a mostly finished model to show you.