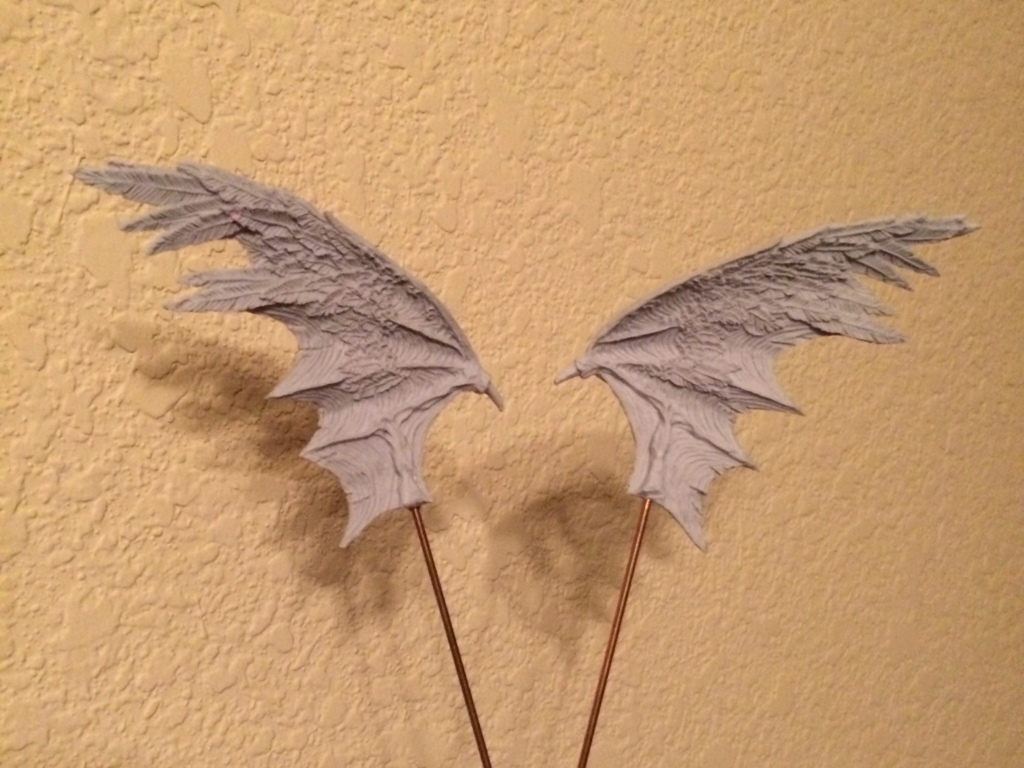 In this installment of the Daemon Prince of Tzeentch build, eagle style, I continue constructing the model I started in part 1, here. When I left off the last article I was searching for a solution to my “wing problem.” I had acquired a metal set of folded wings from a Fateweaver model; however, their weight more than tripled the model’s total weight and I was less than comfortable with the spindly eagle legs’ ability to hold the weight of the wings aloft without long-term damage to the model itself. I stumbled across the Cockatrice model at the local GW store while looking for possible alternatives.  A bit pricey (but not as much as Fateweaver or a Lord of Change) and I think I can use the rest of the bits for other conversions.  The snake tail will make a good Slaanesh conversion and the head might work on another Tzeentch Soul Grinder.  As it turns out, I like the half reptilian, half avian flair to the wings.  They blend the daemon prince and eagle aesthetic nicely.

However, the wing position is more aloft, or swooping, or gliding, rather than the perched position of the Fateweaver wings. This meant I was going to have to find an alternative pose to the one I had in mind, sitting on the edge of some columns or a pile of building rubble. I’ve always wanted to construct an actual battle scene on a model’s base, so this was that chance.  Here I drilled the arm structure of the wing and pinned them with a stiff and large diameter rod. 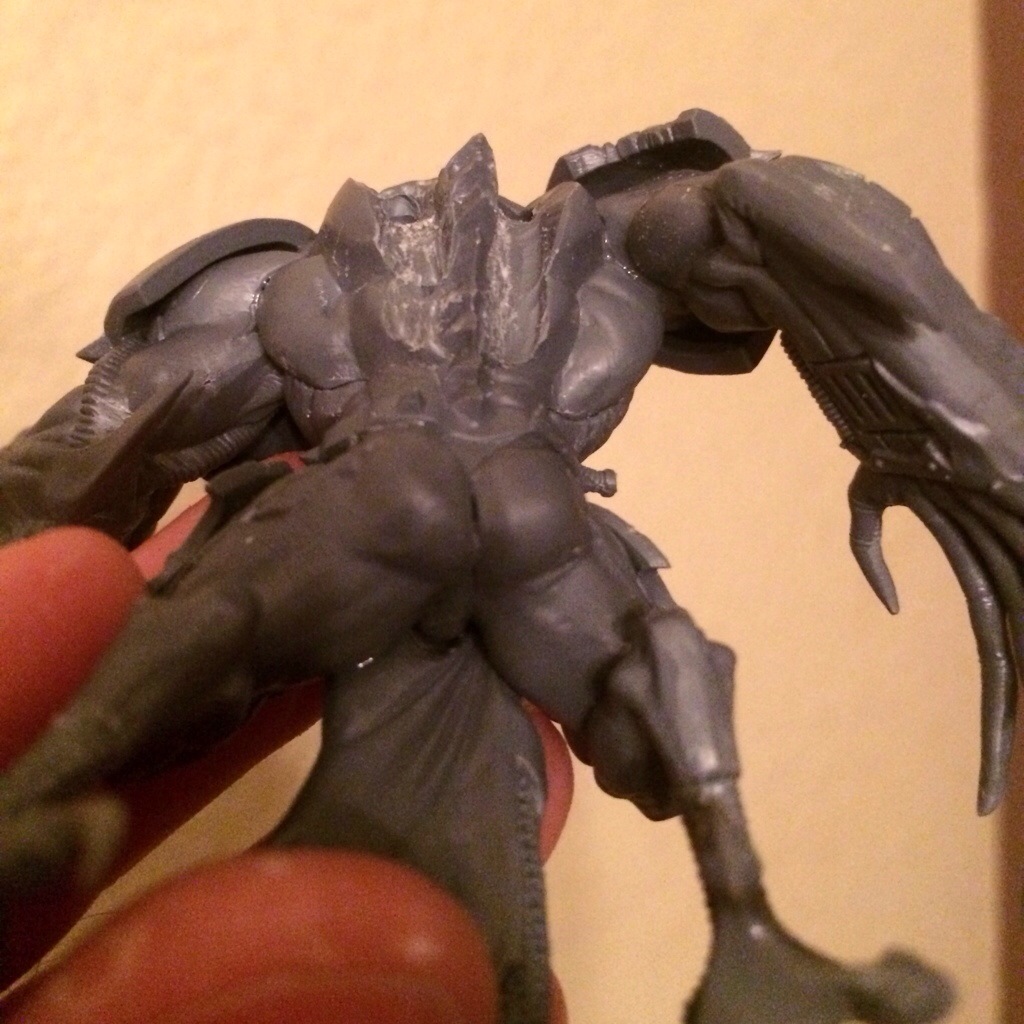 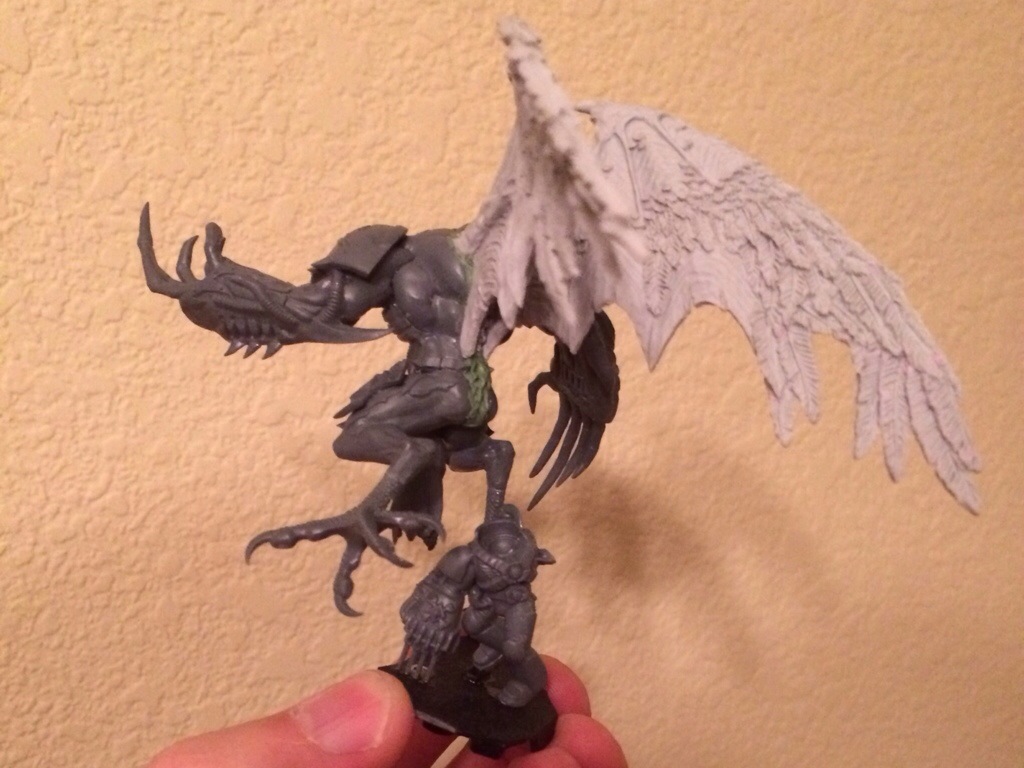 In this image you can see the wings attached. I drilled the back of the model, into the extra greenstuff you saw in the first picture in part 1. I superglued the pins and the wings into the crevices formed with the dremel and then after a few hours I filled the gaps with a very mailable mixture of green stuff, forming the missing plastic muscles into the wings. Below, you can see the combat taking form. I started by finding a fitment of the torso into the talon and gluing it with plastic cement. The entire weight of the daemon prince will be resting on the space wolf, so the bonds need to reach high PSI strength before I mess with it too much. It takes about 24 hours to reach 80% of the final strength with plastic cement, so this process was slow going and was left upside down to cure where no weight or force was placed on the joints as they re-set.  I did not initially have the lighting claws on the model, but I was inspired by a Chaos Raptor.  I thought there was something naive, but epic, about a Skyclaw (juvenile Space Wolf) taking on a daemon prince in aerial combat. 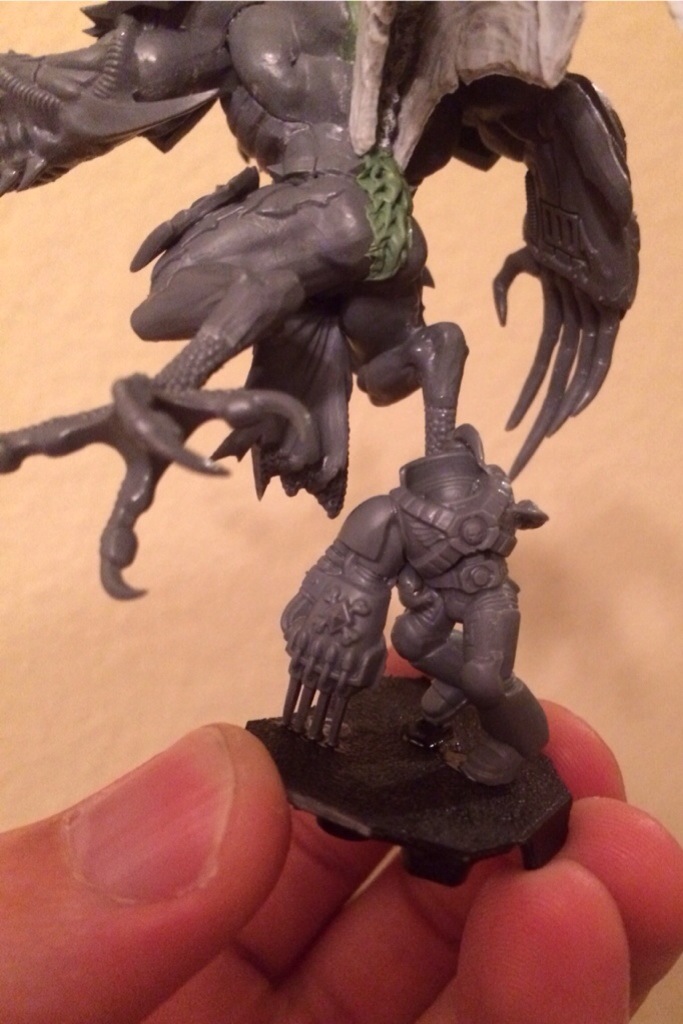 It helped that I was able to use the wolf claw blades as further attachment points to the base, forming a triangle of support at the base. The final base will be a mixture of rock and sand with the claws embedded in the surface.

I had also planned on a tail. THe daemon prince tail out of the box didn’t work for me and I tried the griffon tail, but it was lost as a casualty due to it thin-ness. I opted for some feather/fur texture instead. 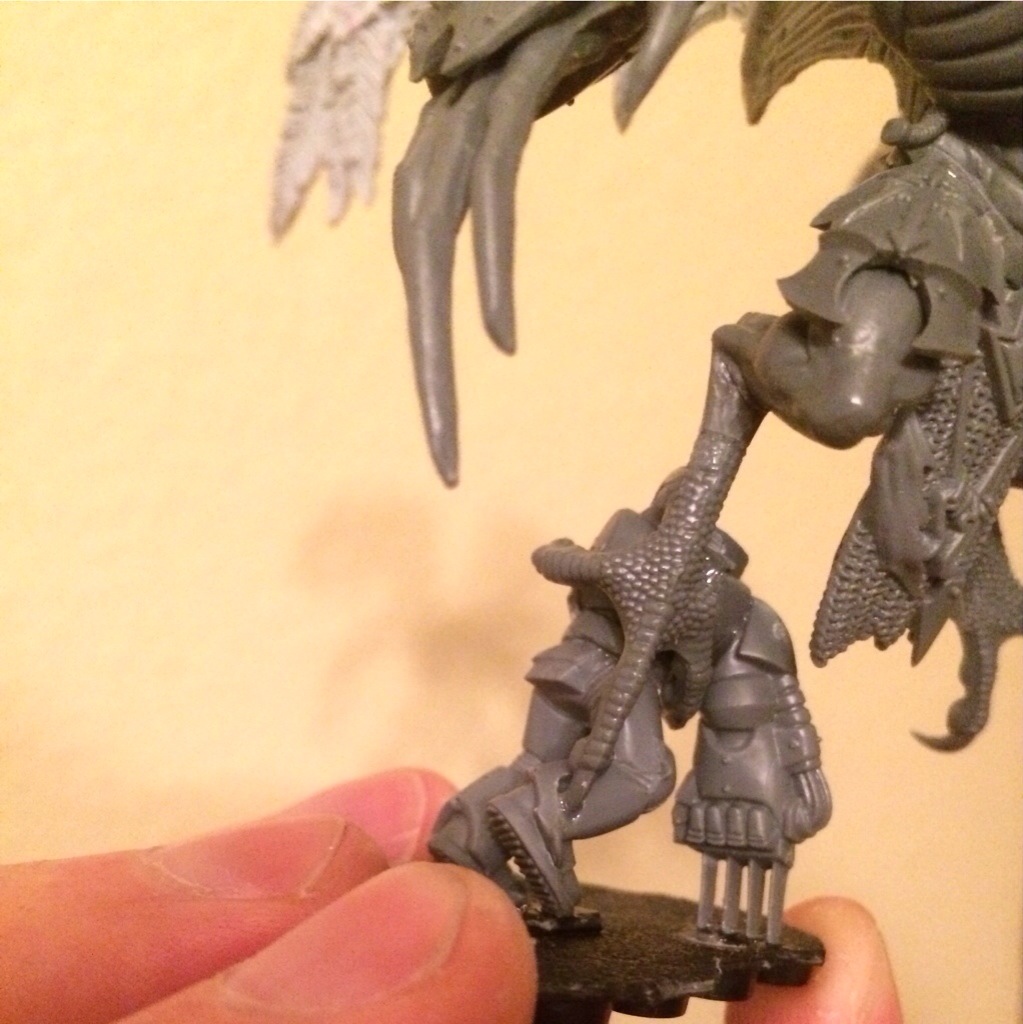 Here you can see the talon digging into the ceramite of the power armour. 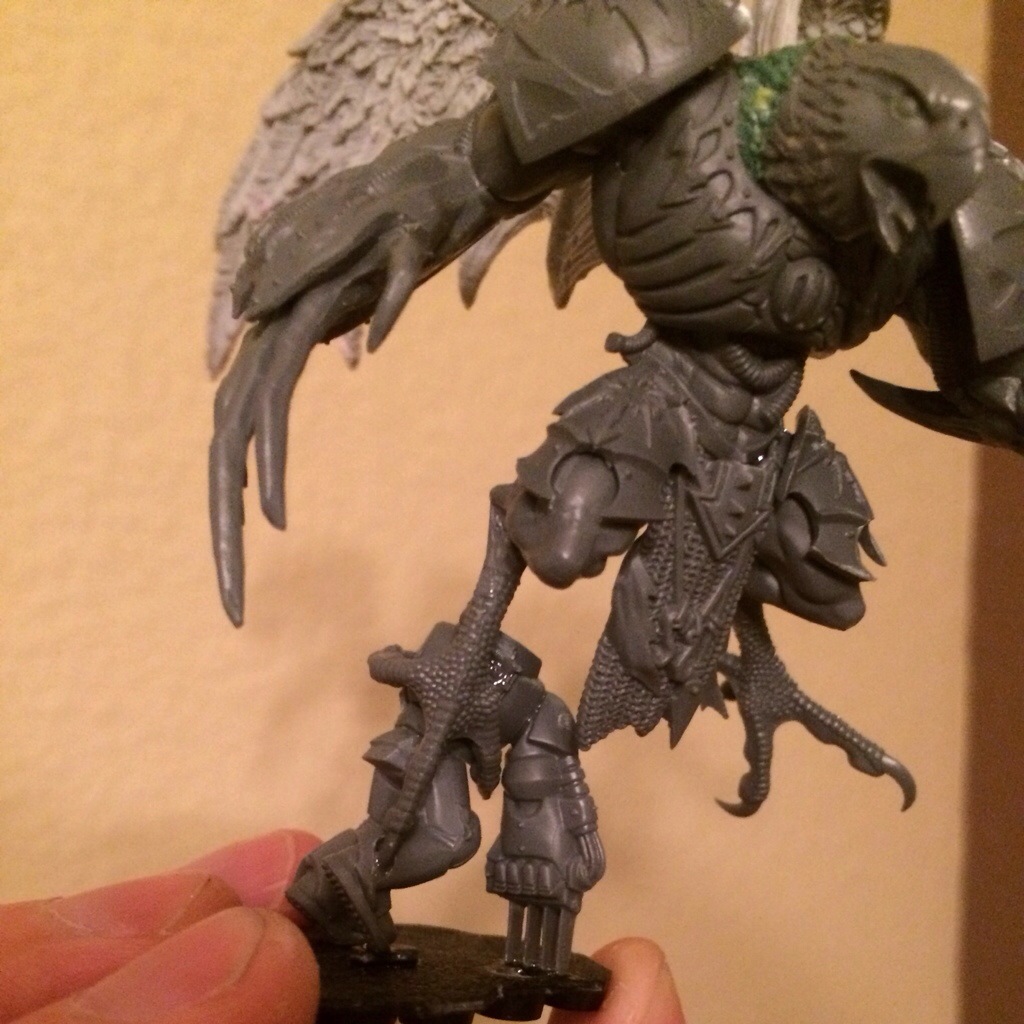 Again, from a different angle. 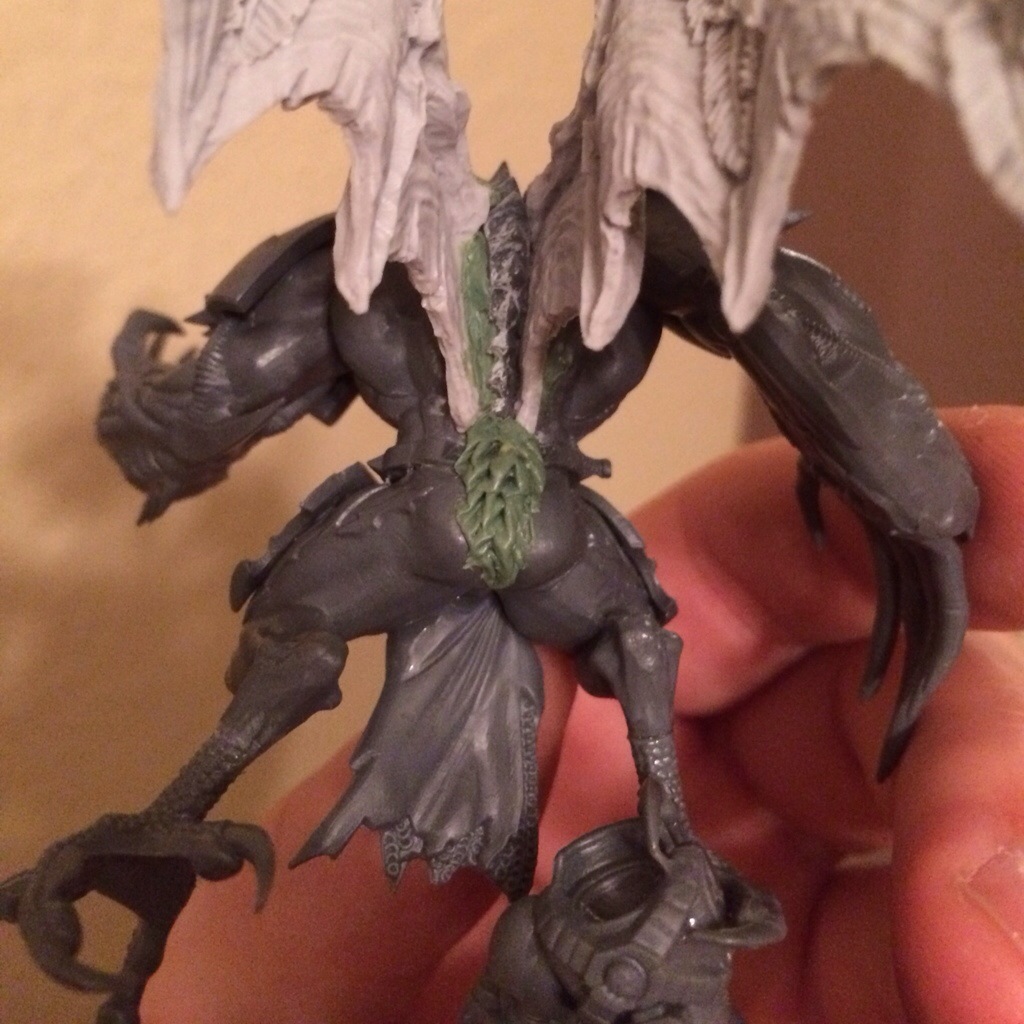 The connecting point of the talon across the bottom of the arm socket will create a problem that I’ll have to solve when I attach the arm and shoulder pad. 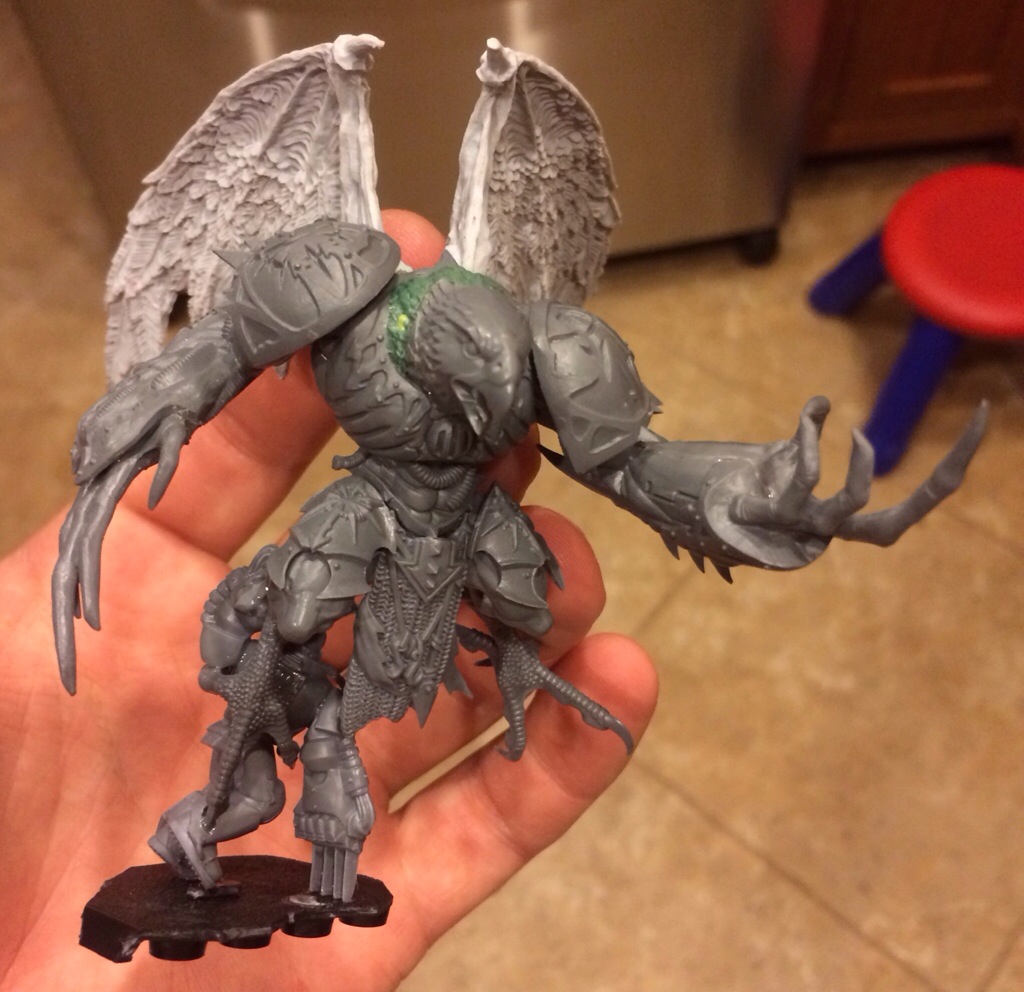 Here the arm with other wolf claw is attached. It is fully over extended, but serves two purposes. First it connects to the leg of the daemon prince above the talon graft joint, strengthening the overall spire of plastic that will hold the model aloft and second, the talon is crushing the sky claw’s chest, so the arm would be in an awkward position in all likelihood. 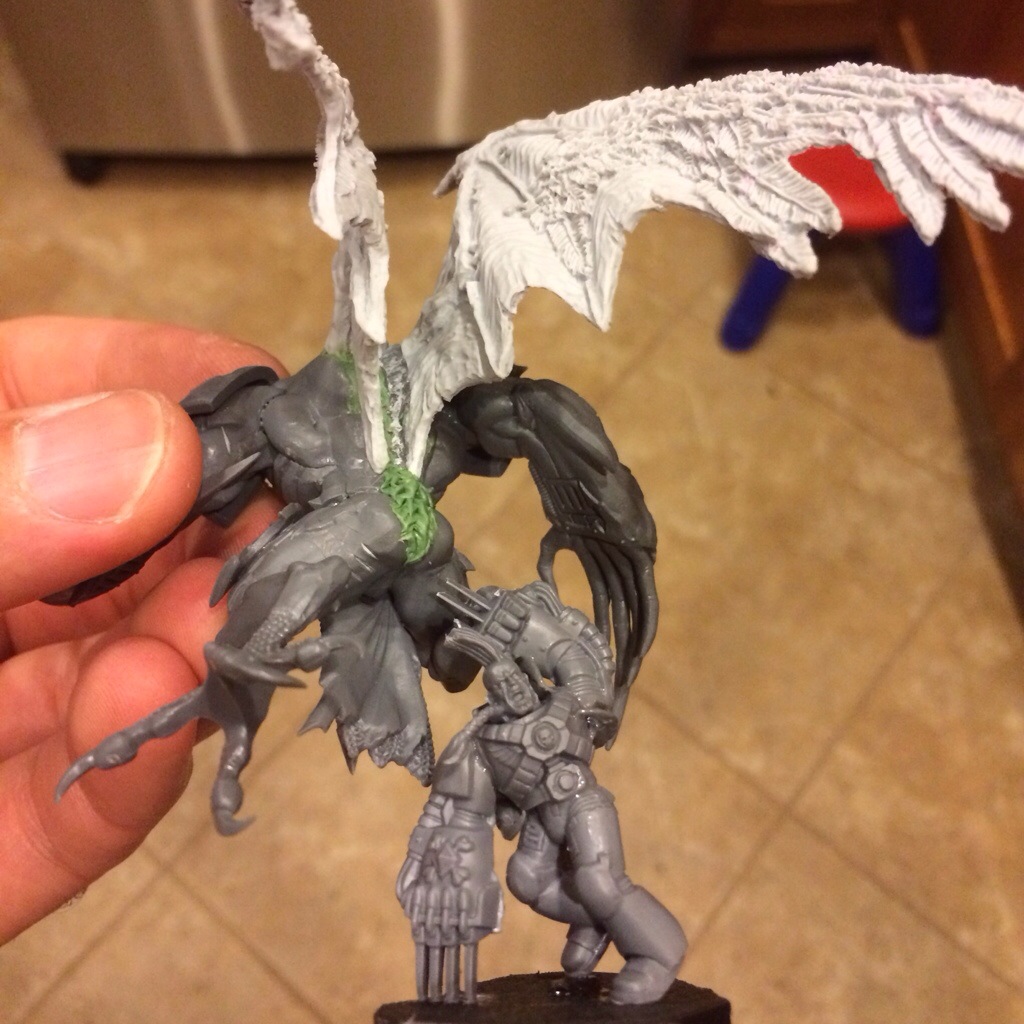 We also now have a face to the poor sky claw.  I rummaged through my collection of space wolf bits to find one with hair moving the right direction and a suitably fierce or painful scream coming from his mouth. 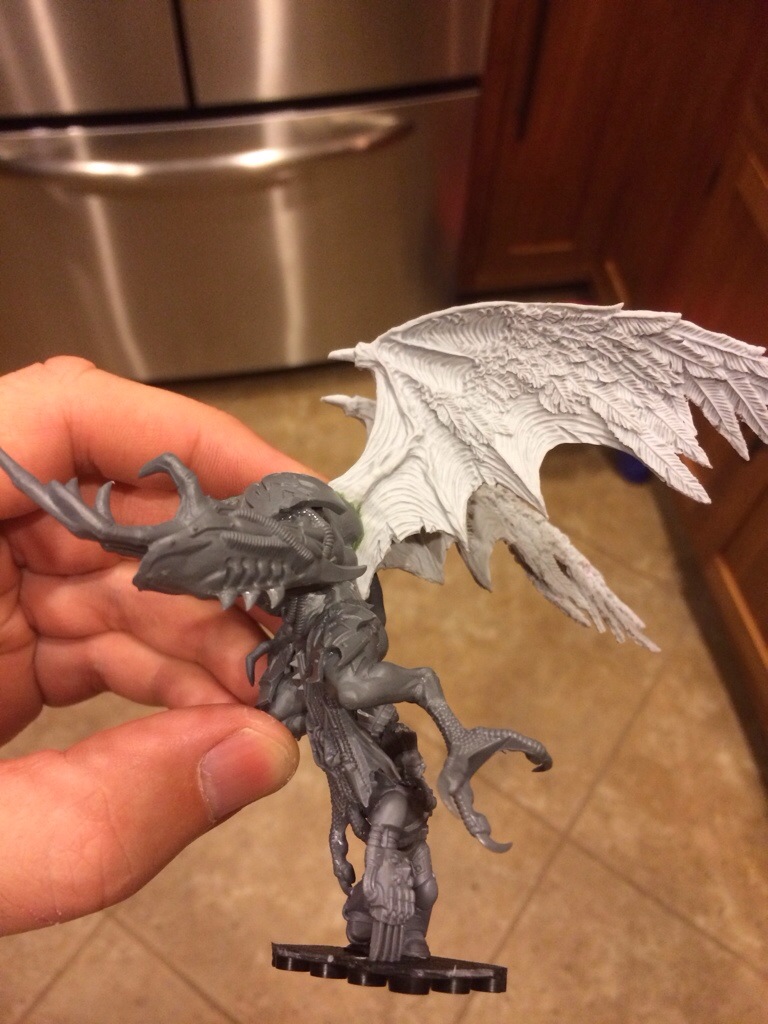 One parting shot until I finish any remaining modelling, like the jump pack damaged and in the grasp of the other talon.