It seems we hear this phrase a lot in the miniature painting world.  I’ve even said it myself a time or two.  Even more often when we come into a time of year where there are plenty of other distractions to take our attention and time away from modeling and painting.  I decided to actually time myself tonight just to see how long it takes to get a combat squad of 5 Space Marines mostly covered in their base coat.  I’m kind of cheating since a major color in the paint scheme is black which I’ve painted using black spray paint from orchard supply hardware.  Using other colors from the army painter line or using an airbrush you can do a solid basecoat of a single color in about the same amount of time for whatever your color scheme may be.  Some automotive parts stores will even mix up a can of spray paint to color-match, which is what people do for painting over scratches on their car.

So to begin, I like to put the base layer of paint for the base on, that way I can slop it all over the sand without worrying about getting some on the model because I’ll come back through and clean it up later.  I also decided to try something new with the power-claws on the sergeant, so I put a base of light grey on them.  Total time invested to this picture below was about 10 minutes. 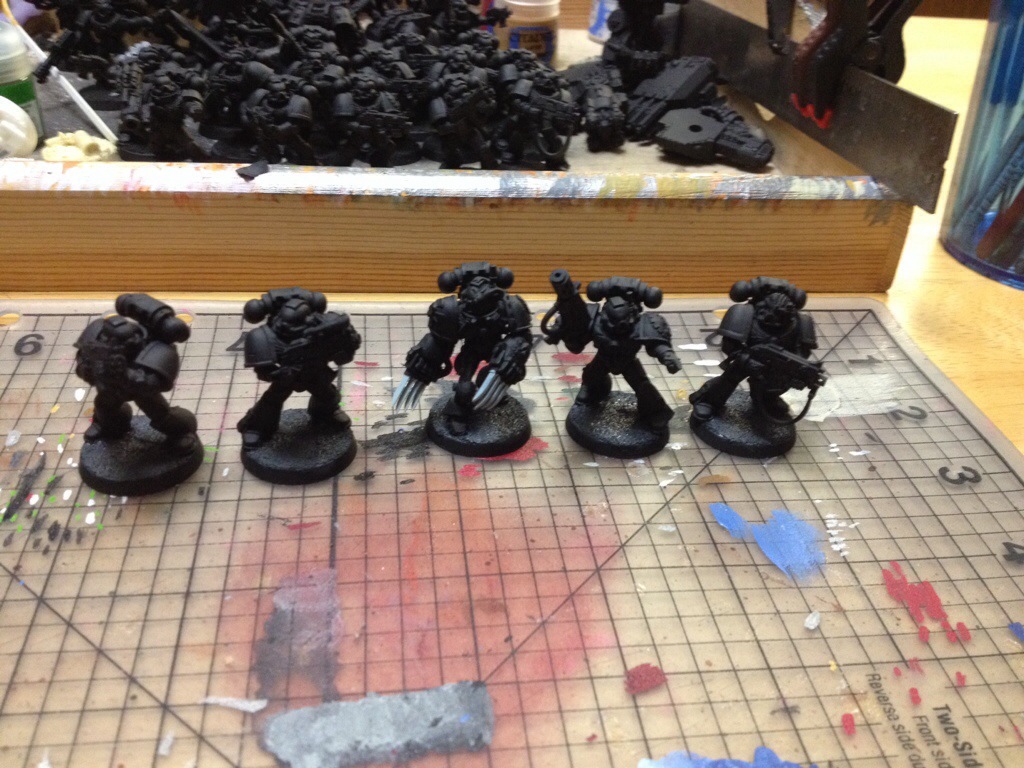 I moved on to painting the legs and bolters and with a few interruptions from my children I was able to get to the point below after about an hour total time into painting.  As you can see I’ve got the red base applied to all the models and have a decent head start on all the metallics which for this paint scheme is actually a fair chunk of time.  I’m also picking out some of the smaller parts and details such as the vents on the backpacks, the accordion seams in the joints of the armor, etc. which slows down the metallics.  So before I stopped for 45 minutes to put the kids to bed and work briefly on a wood project in the garage, I’ve got a good portion of the harder stuff knocked out. 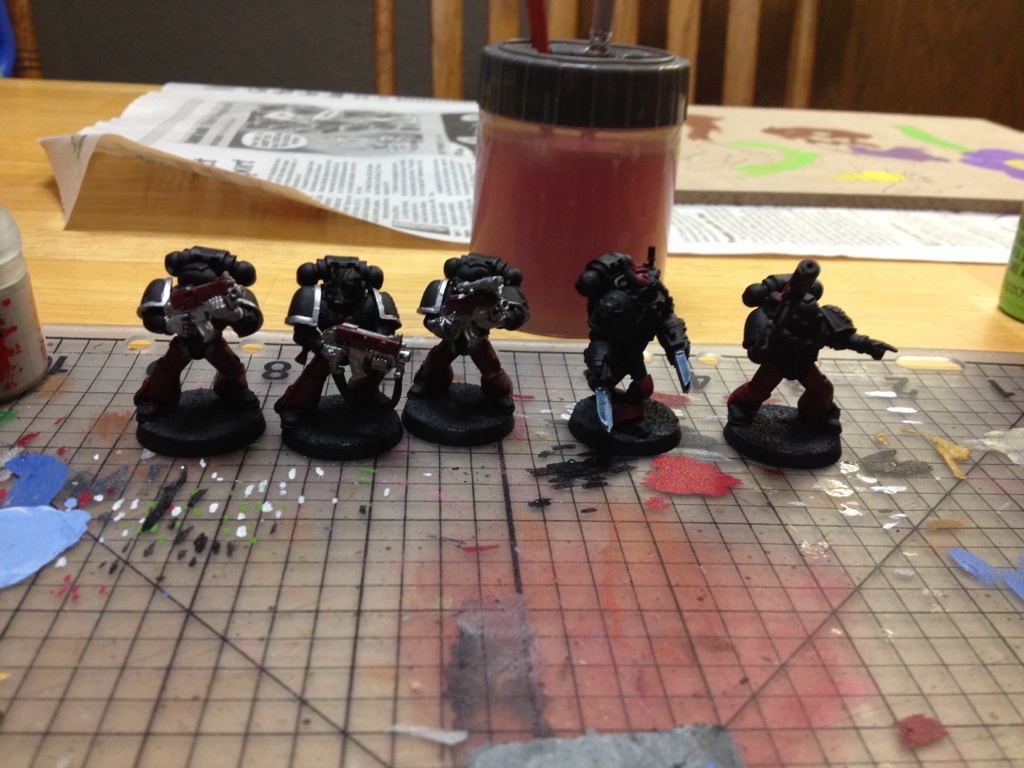 In the picture below you can see what the 5 Space Marines look like after about 2 hours.  Not ready for the battle field, but at this point I would say I’m nearing 40% done.  There is a lot of cleanup to do from the earlier stages where I was slopping paint around in haste, but overall doing the cleanup and shading for the next phase should be fairly easy.  The sergeant was a surprising time sink because the person I’m painting this for used a lot of bits from the iron hands upgrades, so the legs were a bit of a pain, along with the head and the lightning claws.  The effect I’m going for on the lightning claws is just an easy blue wash over skull white (screaming skull I think it’s called now?). 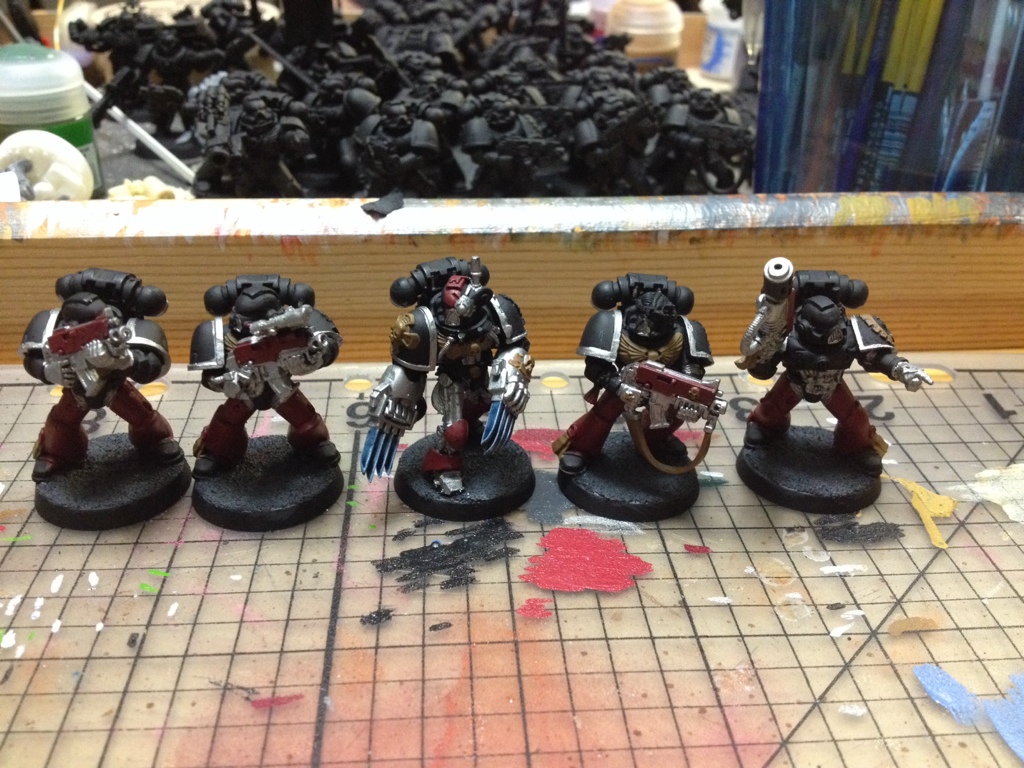 The take away from this is even though it can be difficult to find time to paint, with just an hour a day you could easily get a combat squad of 5 space marines painted up in the span of a week.  Here are some tips to get more painting done with the time you have.

1.  Pace yourself–You don’t have to finish what you start in the same day.  By pressuring yourself to paint in large blocks sometimes you feel it’s more of a job than a hobby that you use to relax, which kills motivation to paint at all.

2.  Take small bites–I used to paint orks a box at a time, and 16 boyz came in a box.  I would spent entire evenings applying the same color to each boy, which became boring.  So now, I usually try to paint between 5 and 10 models.  I try to set a goal of finishing a squad within a week, but don’t pressure myself to get it done either.  The more you finish the higher your motivation is to move on to the next project.

3.  Mix it up–Have a few other projects that you paint going on at the same time.  WARNING: Don’t get project happy and start a dozen projects and then look at all your half completed work and get burned out.  Keep side projects small, something like an IC, a bit of terrain, or even a larger model that will require more time.  I like to have a vehicle I’m painting as a side project because sometimes I get tired of painting teeny tiny details and want to break out the big brushes and get something done.

4.  Assembly line–When painting armies, I generally get a paint scheme I like, then figure out the best, most efficient way to paint all the squads.  I like for all my models to look the same, so having a consistent plan to follow helps, plus it speeds the process up.  This way, I can get to the wash stage and have each of the 5 or 10 models I’m painting be at the same progress at the same time instead of trying to piece-meal paint.

5.  Entertainment–When painting miniatures that are all starting to look the same, it’s good to have something to entertain your mind while you paint.  I listen to music or podcasts, or put in an old movie that I know most of what’s happening without watching the screen.

[Editor: here are a few of the podcasts we like.  There are many others to check out on iTunes.]
The 11th Company
The Independent Characters
Signals from the Frontline

There are lots of other things you can do in order to motivate yourself or keep painting exciting for that little amount of time that you carve out of each week to get something done.  Post a comment and share what you do that keeps painting interesting for you!