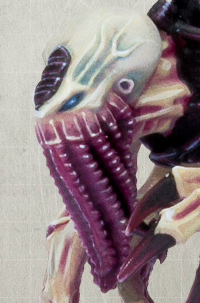 Just an hour ago, Eddie, announced on the Games Workshop: Digital Editions Facebook page that we’ll be seeing 3 data slates for Tyranids incoming in the near future:

“We announced in this month’s issue of White Dwarf that, starting later this month, the first in a trilogy of new Tyranid Dataslates will be released.  All three of these are going to have new datasheet formations for Tyranid armies to use, and if you’re a fan of Genestealers (I know i am, far to many games of Space Hulk in my teenage years), I think you’re going to like the first installment in the trilogy.”

We already know the first data slate will feature a “Vanguard Infestation” concept.  GWDE has hinted that ymgarl Genestealers may show back up in this data slate if the picture they posted earlier this week is any indication…

There were previous rumors about 3 digital updates, rumored to include:

Update: Now, I knew there was a previous rumor about these supplements.  It took me a while ti track it down because it was originally published last October on BOLS:

Hivefleet (Big Bugs – not real title 2014)
Focuses on Monstrous Creatures. Book adds variant rules for deployment and FOC changes for units like the Carnifex, letting you take them in both Heavy and Elites, plus the ability to operate independently. Hivefleet balances this with some prohibited units, and the inability to go first in any mission.

Hivefleet (Fast Bugs – not real title ???)
Focuses on high speed fast-moving bugs. FOC changes to emphasize these units such as Gargoyles as Troops, new abilities and special rules for Ravenors, while Gants get minor enhancements as well. This hivefleet is balanced by prohibiting “traditional” walking Monstrous Creatures. A new flying HQ unit is included.

Genestealer Cult (???)
The first “hybrid supplement” – this book will be a combined book for IG and Tyranids. It allows both codices to ally, but heavily restricts units selections on both. Look for smaller “infiltration bugs” such as Genestealers, Broodlords, Lictors and such from the Tyranid side while the Guard are very heavily restricted on units and heavy equipment. The list’s HQ must include a psyker warlord from either the IG or Tyranid units allowed. A new psychic power list is included.

My Wishlist and other old news

If the Vanguard Infestation does indeed have hybrids I would be in heaven.  GW release event rules last year for a Genestealer hybrid and Magus for a special Warhammer World Event.  You can find those Event Rules here:

So, tell me what you’d like to see in a supplement or dataslate?  What would make you want to play Tyranids or what would make your Tyranid force that much cooler on the table (and able to stand up to Tau and Eldar shooting?