The Tyranid Vanguard Infestation dataslate is now up for pre-order on Black Library.  More info just in from Eddie at GW Digital:

“The Tyrannic War Veterans might have their work cut out for them next week though, as book one in a brand new Tyrannid Dataslate trilogy is released. The first instalment, Vanguard, deals with the insidious first wave of Tyranid attackers. It contains new background, missions and five new Tyranid formations to use in your games. You can pre-order a copy now, ready to download a week today.”

Also, Eddie says we can have multiple formations in a single Tyranid army:

we can see the Deathleaper highlighted as well as a Deathleaper Assassin Squad Formation (no idea if this is an Apoc or regular formation): 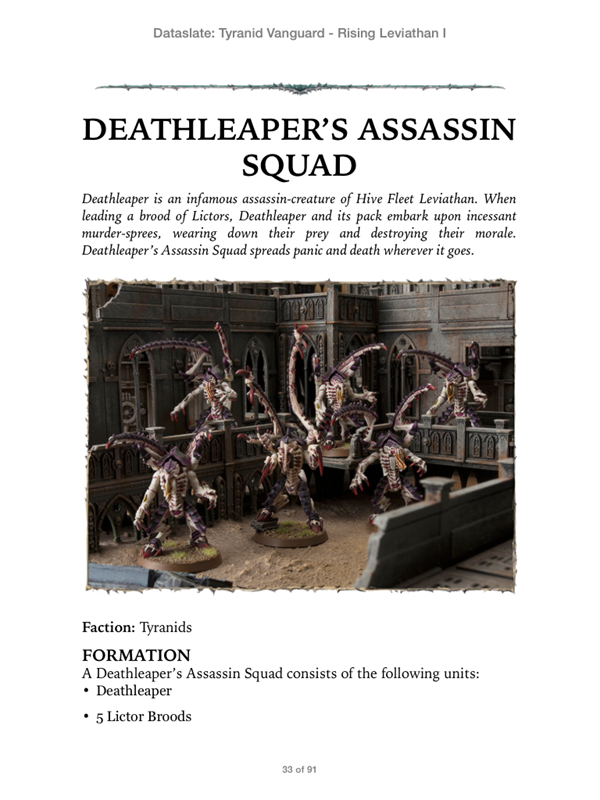 There also appears to be a Broodlord Hunting Pack, but no info on what is contained in that section at this time.

Finally, we have double confirmation of the 3 dataslates from the pre-order page, which lists a February date for release…

“Leviathan Rising is the first book in a trilogy of Tyranid Dataslates, each of which details the different stages of Hive Fleet Leviathan’s assault upon the planet of Satys. This first installment showcases the vanguard organisms of the Tyranid fleet. It contains formations, missions and rules so that you can re-create the hideous invasion techniques of Hive Fleet Leviathan in your games of Warhammer 40,000.”