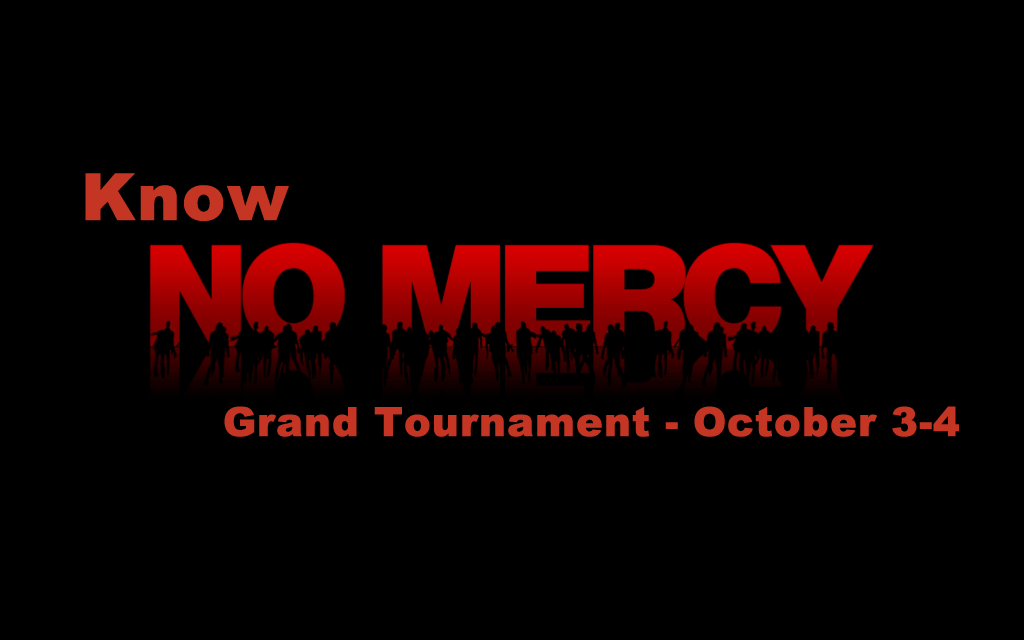 League of Underwhelming Miniature Painters presents its first Grand Tournament and the first single Warhammer 40K GT to be held in Sacramento since Capital Punishment in 2005.  “Know No Mercy GT” (KNMGT) hosted at Great Escape Games in Sacramento, CA is being held Saturday and Sunday October 3-4, 2015.  he event is an Independent Tournament Circuit (ITC) event; however it will use a modified ITC FAQ and will use a collection of missions drawn from an inspired by other events, but specific to the KNMGT.

The event mission primer has not been finalized; however, it will feature a myriad of styles sure to test even the greatest general.  The 6 rounds will include two missions sure to be familiar to veteran ITC competitors, two mission familiar to NOVA attendees, a simple Purge the Alien that everyone loves and a chance to apply your army’s flexibility in a Maelstrom of War with a small twist (the ability to use army specific cards and discard multiple objectives per turn). We will not be checking lists in advance, and only on the day of the event if someone questions a list’s validity – the event is run on the honor system (an illegal list will result in losses for all rounds leading up to the identification and intentional cheating will result in an immediate DQ and placement on our naughty list).

On Sunday, October 4th, all players who are out of the running for the title, and to whom ITC points standing will not matter, will receive free entry in to No Mercy 3, a 3 round RTT.  Basically, we’re giving everyone who gets knocked out on day 1, a second chance to be the winner (of a 3 round RTT).  What more could you ask for, then 2 chances to win?

We are not intentionally modifying core rules within the game. This means that Invisibility, Destroyer Weapons, re-rollable saves and the allies matrix will function per the Warhammer 40,000 Rulebook.

It the intention of the event organizers to allow all army types to compete how they are best adapted to play the game. This means that there will be multiple ways to win in many of the missions. Also, the event has a hard cap of 64 players, which means that there is a natural victor, so battle point scores will only be relevant to determine placing where win paths are tied from 3rd place and lower.

The mission primer can be found here.  It is subject to revision and refinement until 30 days prior to the event.

In order to give players a 2nd chance at winning an event, on October 4th (day 2 of the GT) we will also be running No Mercy 3. At the end of day 1 of KNMGT there will be 32 players who have accumulated at least 1 loss. Those players in the bottom half of the tournament bracket will be unable to place or score any significant amount of ITC points. They will be dropped from the GT automatically and automatically entered into No Mercy 3 at no additional cost. NM3 and the last 3 rounds of the GT will be run concurrently on October 4.

Since No Mercy 3 RTT will be treated as an entirely separate event for scoring purposes (even though it will occur in the same location as the GT) participants are not required to use the same army list they used for the GT.  The same army list restrictions and allowances still apply.  The RTT is not open to individuals who did not participate in the GT unless space allows the day of, on a first come-first serve basis (added 7/29/15 based upon inquiry).

Games Workshop has been releasing new and revised armies at an unprecedented rate. Because our GT will incorporate both generalship and hobby (painting and modeling) we do not want to force players to change their army close to the event. A such, we will handle new/replacement codexes as follows (by release date):

Other items of note:

The event will cost $50.  Final mission packets and rules will be posted no later than August 9th.  Refunds will not be provided after August 28, 2015.  Refunds that are given will be less $5 for paypal/administrative fees.  Tickets are transferable more than 24 hours prior to the event with email confirmation from the tournament organizer.  he prize pool will be divided between awards and raffles for both the GT and the RTT.