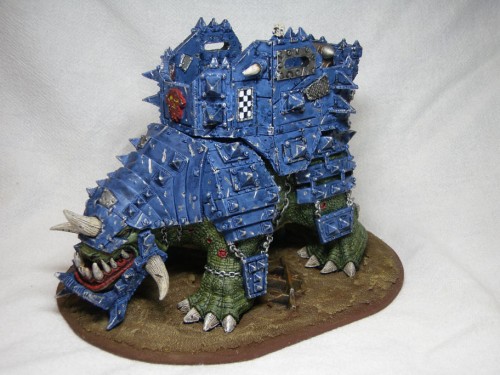 I purchased this Ork Squiggoth back in 2007 at Gamesday Chicago.  I got it out as soon as I got back home to start modeling and playing with it for the casual games with friends.  I even picked up the imperial armour update that it was included in at something like $25 for a book for the rules for a single model.  Needless to say I was in love with the model, or at least the idea of owning a painted ork squiggoth.  Then reality set in and I realized what a beast of a time I was going to have getting the sucker painted up for playing with, so back in the box she went; for six and a half long years.

I fell out of touch with the hobby and mothballed all my stuff in the hopes of eventually getting back into the hobby, which I did once I moved to a new area and connected with a great group of like minded casual gamers.  After a year of pretty much leaving the orks shelved I decided to start working them through the 6th edition “assualt is dead” machine.  Orks were my very first army, and it’s kind of like your first girlfriend (or boyfriend), you always have a special place for them, so after dusting them off and running them as allies a few times, it was time to start taking this seriously.  After warming up on a few ork models, I got this bad mamba-jamba out and got to painting.  And painting…and more painting, until, low and behold, I got every square inch of the squiggoth covered in color.  And it promptly died before doing anything in her maiden voyage.  Such is the curse of the newly painted model.  But she’s a beauty on the field for sure. 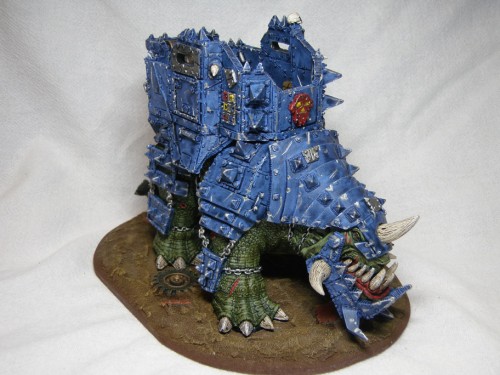 When deciding on a paint scheme I went with a more traditional deffskulls.  During my research on painting this monster, I didn’t see many with the armor colored anything other than red.  There were a few yellow, but they were the exception.  I like the way the blue turned out, and overall, I’m very pleased with the detail on this model, there is certainly a ton of it. 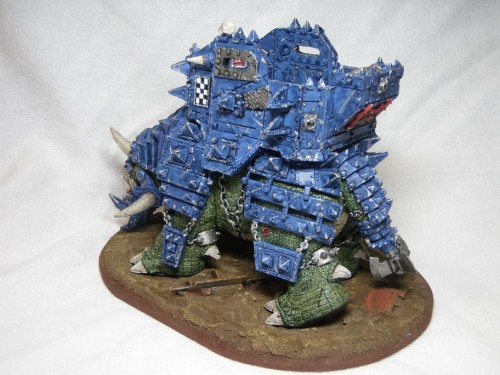 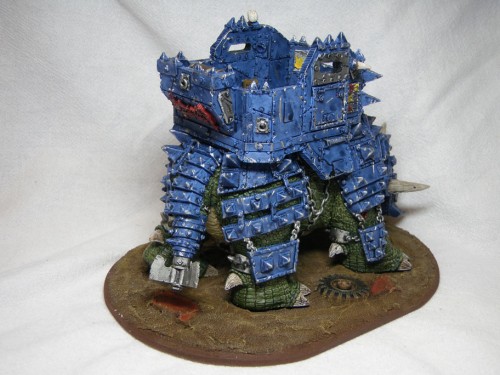